The modern-day name of the city Ephesus was derived from the Ancient Greek: Ἔφεσος Ephesos. It is called Efes in Turkish. It was an ancient Greek city on the Anatolian coast of the Aegean sea. It was completed around the years of 10th century BC.

Where is Ephesus Ancient City located?

The city of Ephesus was built and still located on the west coast of Turkey, just 3km west of present-day city Selcuk. Selcuk, which belongs to the Izmir province, is the nearest settlement to the ancient city. The other nearby city is Kusadasi, which is about 18 km on the south, and the Pamucak beach is only 5 km west from the gate of Ephesus. 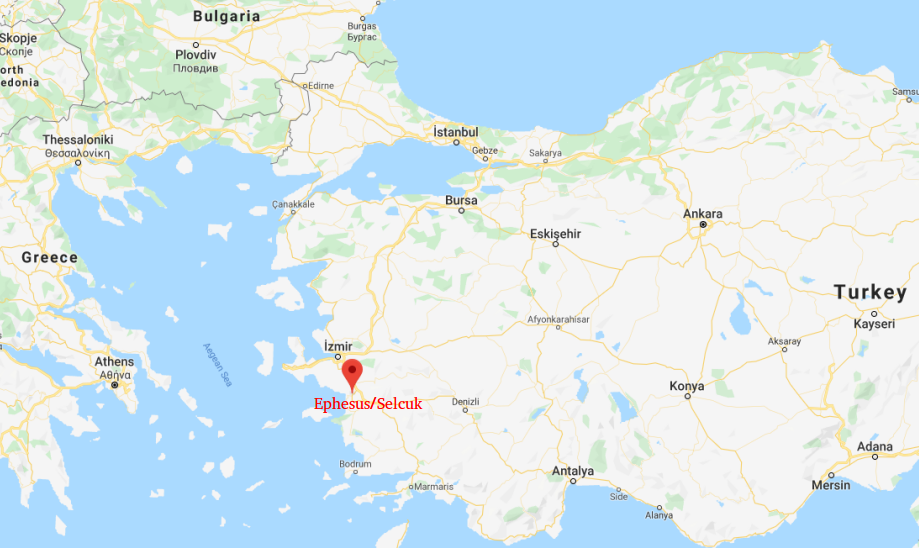 How to get to Ephesus Ancient City

The easiest way to visit the ancient city of Ephesus is to take a minibus (called dolmus in Turkish) from Selcuk bus station. You can also take a taxi from Selcuk or Kusadasi to Ephesus, but they cost more than dolmuses. And always ask for the price before getting into the taxi to make sure they don’t charge you extra. Also, if you are taking the taxi to Ephesus, you might want to take it to the upper gate so you can walk down to the other gate easier.

So, how to arrive Selcuk? There are plenty of ways to arrive, like taking a bus, train or Izban railway. If you are coming from Izmir Adnan Menderes airport, you can take the TCDD train or Izban train from Izmir Airport to Selcuk city center. The train station is directly in front of the airport. Or, there are shuttle buses that depart from the gates of Izmir Adnan Menderes Airport to Selcuk. You can also take the same trains from Izmir city center Basmane & Alsancak. If you are coming from Pamukkale to Selcuk, you can take the train from Denizli, which is the cheapest way to reach Selcuk.

What to see in Ephesus Ancient City?

There are a lot of things to see in Ephesus. It is one of the biggest archaeological sites in the eastern Mediterranean. The ruins that are already excavated give some idea of the city’s original structure.

The Celsus Library is an ancient Roman building in Ephesus, currently a part of Anatolia, Turkey. It had been built in honor of the Roman Senator Tiberius Julius Celsus Polemaeanus, referred to as Celsus. The Library’s facade was reconstructed carefully from the original pieces. Celsus paid for the construction of the library from his own wealth and he is buried underneath the library. The library is designed to make it look bigger and receive the morning light the best way.

The Great Theatre of Ephesus

The theatre had an estimate of 25 thousand seats and it is believed that this is the largest theatre of the ancient world. The open-air theatre was used for many purposes, such as performing drama as well as gladiatorial combats.

Even though the famous Temple of Artemis is not currently inside the city, it used to be. Temple of Artemis is one of the Seven Wonders of the Ancient World. It was thanks to Artemis Temple that the city was titled “Servant of the Goddess”. Currently, there is only a single column of the Artemis Temple on the site. Some of the findings are in the British Museum and some others are in the Istanbul Archaeology Museum.

See also  Selcuk Where to Eat