Pamukkale city name means ‘Cotton Castle in Turkish, you will understand why when you see this magical natural masterpiece. Forming over hundreds of thousands of years, the travertine pools cascade down the hillside, and have been visited by many famous people. The natural water here is considered to possess healing qualities, visitors can enter the pools. It is now listed as a World Heritage Site.

Since it is only about 3.5 hours away from our Selcuk hotel by bus. There are many people doing day trips to Pamukkale and the travel agencies are organizing daily trips to this ancient beauty. If you’re interested in having a day trip, we can help you organize it easily.

Travertines are rocks that have collapsed as a result of a chemical reaction. Since Pamukkale is a big earthquake zone, it has quite a lot of thermal water resources. When thermal water combines with air, we see the appearance of cotton because of calcium carbonate. Pamukkale Travertines are in the ancient city of Hierapolis. So if you want to see the travertines, you have to enter the ancient city of Hierapolis. Also, there is the Hierapolis antique pool on the upper part of the travertines. You have to pay an extra 32 Turkish Liras per person to enter the Hierapolis ancient pool. You can take a walk around the pool and take pictures without going into the pool. 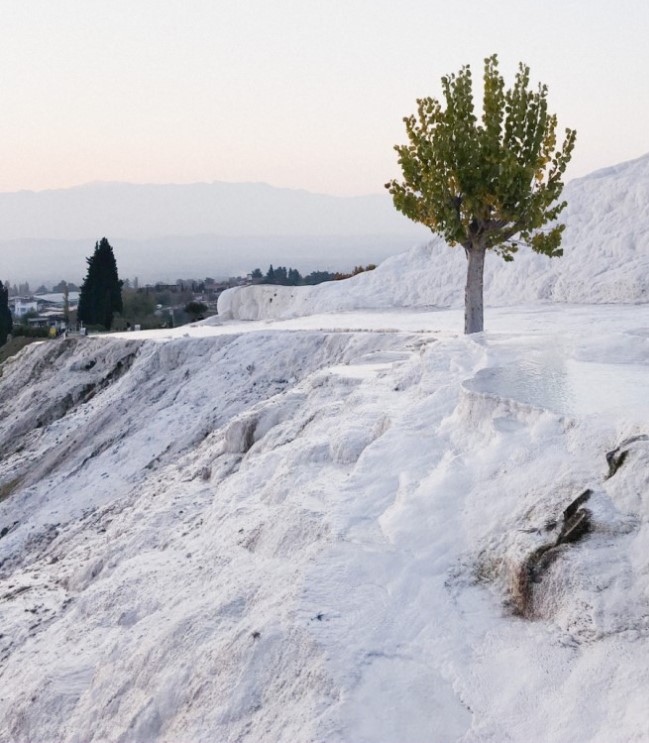 Pamukkale is a district of Denizli city. Pamukkale has both natural beauties such as travertines and historical places such as Hierapolis & Laodicea’s ancient cities. Today, many tourists visit Pamukkale travertines and thermal springs for health purposes. These natural resources have been the reason for the establishment of many important ancient cities here in history. Pamukkale takes its name from this cotton image of the travertines. The word “Pamuk” means cotton. The history of Pamukkale started in the Hellenistic period in the second century. In the 2nd century BC, Pergamon King Eumenes II established a city in Pamukkale. As the centuries passed, different kings here developed this city. Other kings even set different towns such as Laodicea. So, Roman emperors had this ancient city for a long time. In the 11th century, Turks captured this ancient city. Pamukkale has come to this day in this way.

What should we see in Pamukkale?

One of the most significant historical places of Pamukkale is the ancient city of Hierapolis.  King Eumenes II founded the ancient city of Hierapolis in the 2nd century. The reason why the city’s name is Hierapolis is Hiera, wife of Telephus in Greek mythology.  Also, Hierapolis has many hot underground water sources around it. Therefore, geographically this region is an earthquake zone. Due to earthquakes, there is no trace left from the Hellenistic period of Hierapolis. The artifacts we see today are generally those made after 60 BC. One of the biggest symbols of Hierapolis ancient city is the great old theater. Hierapolis Ancient Theater is 1800 years old. It has been preserved together with all the architectural materials of the Hierapolis Antique Theater. With this feature, it is the only example among the Roman period Anatolian Theaters in the Mediterranean. Hierapolis Antique Theater has a capacity of 10,000 people.

Also, there is the St. Philippe Martyrion Church in the ancient city of Hierapolis. Although the date of construction of the St. Philippe Martyrion Church is uncertain, historians estimate it to be the fifth century A.D. Saint Philippe came to the Pamukkale region to spread Christianity. Pagan people killed Saint Philippe in this area. That’s why people needed a church built to commemorate Saint Philippe here. This church has an important place as one of the seven important churches in Anatolia. Since the roof of the church is wooden, it does not have any roof today.

Pamukkale travertines and the ancient city of Hierapolis are just next to each other. Hierapolis, the “Sacred City,” is at present-day Pamukkale in south-central Turkey. Perched above the travertines of Pamukkale sit the Ancient ruined city of Hierapolis. Listed as a UNESCO World Heritage Site, there is not a lot known about its origin. Pamukkale’s hot springs gave this city life, as people had been curing their ailments in the ‘spa’ since the 2nd Century BC. Situated onsite is a large Necropolis filled with Sarcophagi, including that os the great Marcus Aurelius Ammianos. More info on Hierapolis. 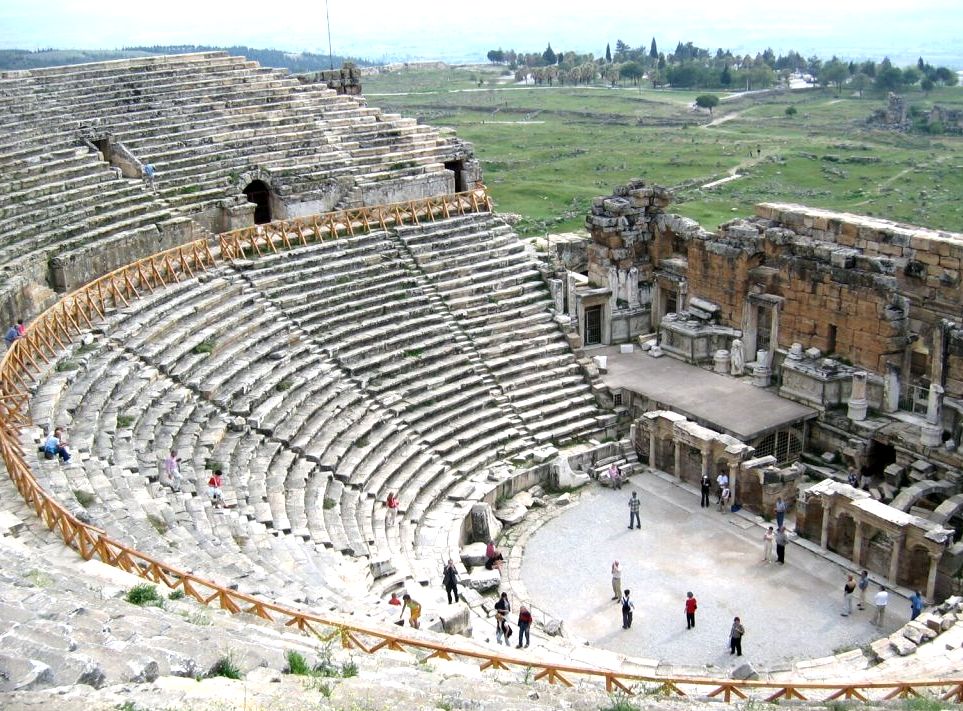 How can we go to Pamukkale?