Of course, once you are thinking to visit Selcuk, you definetely want to know what you can do here. Well, even though most of the people come to this city for the historical Ephesus Ancient city, there are a lot of things to do other than that. Here, we will list them starting from the most famous Ephesus.

What to do in Selcuk?

You can’t travel Selcuk with an empty stomach so first, have a look at our post on Where to eat in Selcuk. 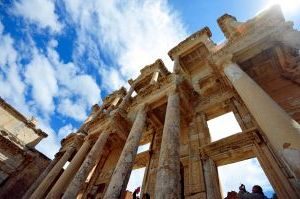 The historical site of Ephesus was an ancient greek city just 3km away from Selcuk city center. It was built around 10th century BC. Most famous part of the city is the Celsus library. It looks like a 2 floor library from outside but actually inside was built as 3 floors. This library was the 3rd biggest library in the ancient world. First two being Alexandria and Pergamon.

It is easy to get to Ephesus from Selcuk. You can take the minibusses (dolmus) that departs from the bus station in about every 10 minutes. Or you can walk the 3 kilometers if you feel like it.

The temple is currently located in the middle of Selcuk and Ephesus. When it was built the area was belonged to the Ephesus ancient city. The temple was one of the Seven Wonders of the Ancient World. Now, you can only see a column and a few ruins at the site.

The  village of Sirince was built and habitated by greeks between 15th and 19th century. Now Turks are living in this cute small town but all the buildings are preserved from old times so you can see the small version of Greek architecture inside Turkey. It is like a secret village in middle of the nature.

This house that is on top of the Nightingale mountain next to Ephesus is where Mary Mother of Jesus was believed to lived her last days on earth. She was brought here by on Saint John and was protected here.

The basilica was modeled based on the lost Church of the Holy Apostles in Istanbul. It stands over the believed grave of John the Apostle which gives the name to the basilica. It was built in the 6th century and today only open for touristic reasons. It can be seen from the city center and about 5 minutes walk from the bus station (and our hotel).

More on what to do in Selcuk

2 thoughts on “What to do in Selcuk”